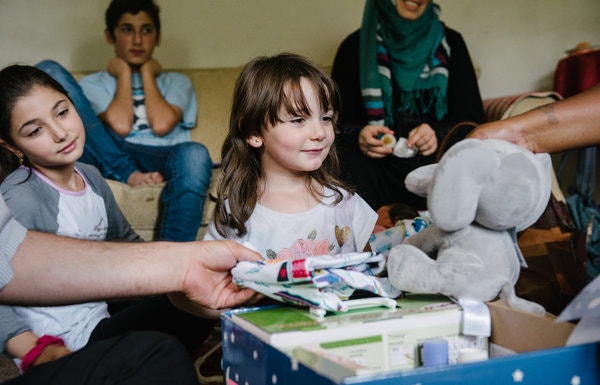 This article appeared in the New York Times on August 22, 2019. Read the original piece.

In more than 700 communities across the country, teachers are supporting students of all ages — and their parents — outside the classroom. Even for the youngest children, the benefits can be profound.

By Christina Caron and Katherine Zoepf

Yumna al-Kashto is only 4, but she’s already had to adapt to lots of changes in her life.

She was born in Antakya, Turkey, after intense fighting forced her parents and four older siblings to flee their home in Idlib, the Syrian opposition stronghold.

In December 2015, when Yumna was only 4 months old, her family resettled in Baltimore. And in July, on the day before her fourth birthday, her mother gave birth to her newest sibling.

On the day the baby came home, Zoe Hardy and Latanya Scott, Yumna’s assigned pre-K teachers at Moravia Park Elementary School, were there, too. Their goal? To develop a rapport with Yumna and her family before the school year officially began.

“This is for you,” Ms. Hardy told Yumna with a smile, placing a large box decorated with pictures of teddy bears onto the table. The box, provided by a local nonprofit, contained children’s books, pajamas and other items aimed at supporting a back-to-school evening routine.

“We like to get to know the family, let the family get to know us,” Ms. Hardy told Yumna’s parents. “That way we can all make sure Yumna is safe and she’s getting what she needs.”

The Moravia Judy Center, which runs early childhood programs at Moravia Park Elementary School, started its home visiting program for pre-K and kindergarten students in 2016, sending pairs of teachers into students’ homes in an effort to build mutually supportive relationships with their families, most of whom are poor enough to qualify for public assistance.

The visits are modeled after a method that was devised more than two decades ago by Parent Teacher Home Visits, a nonprofit based in Sacramento, and have quickly expanded to more than 700 communities in 27 states and Washington, D.C.

The overall concept of home visits isn’t new — they are a requirement of Head Start, a free pre-K program for disadvantaged children, and are also common at Montessori schools and various community programs. But the Parent-Teacher nonprofit’s model takes a unique approach.

With its method, teachers and school staff travel in pairs to visit a family at least once — either at home or in a neutral public setting like a park — usually ahead of the school year. The teachers arrive prepared to listen: They do not take notes, fill out paperwork or lecture. Instead, they want to know about the family’s hopes and dreams for their child, and connect with their soon-to-be student in a nonschool setting.

The visits, which typically last about 30 minutes, are not mandatory for the teachers or the parents. The teachers, who are paid for their visits, are encouraged to meet all their incoming students or a cross-section of their class: Targeting certain families is discouraged because it can lead to stigma.

Studies have found that these types of home visits can have numerous benefits for students, including improvements in attendance and reading assessments. Families who participate also tend to become more involved in their children’s education. While the program can be implemented for students through grade 12, teachers say it is especially important for preschoolers.

According to Michelle Matthews, coordinator of the Moravia Judy Center, home visits have built trust among the school’s large population of refugee families, who are often reluctant to send very young children to school and who may be worried that their dietary and religious requirements will not be respected.

“If a family feels secure when their children come into prekindergarten or kindergarten,” Ms. Matthews said, these conversations can help shape positive attitudes toward school for years to come.

Laura Leon, 29, a high school teacher at the Yvonne A. Ewell Townview Magnet Center in Dallas, enrolled her son, Josue Leon, in the home visit program last September. At the time, he was 3 and had just entered preschool.

Before the home visit, Josue was quiet in class and struggled to make eye contact or follow routines, Ms. Leon said.

“The teacher would say good morning to him in Spanish and English and he would not respond,” she added. “He was just having a hard time adjusting.”

A few weeks into the school year, Josue’s teacher arrived at his home along with a teacher’s assistant for a home visit, Ms. Leon said. As soon as they arrived, she added, Josue “lit up,” gave them a hug, and started showing them his toys and introducing them to the rest of his family.

“They were really surprised that he knew so many words, that he was able to hold a conversation,” she said. “It was like night and day. They had never seen him like this in the school setting.”

When Josue returned to the classroom, she continued, “He would say good morning, he’d give her a hug, give her high-fives. It really opened him up.”

The visit was so helpful that she made plans to do home visits with her own students this year.

At the end of the 2018-19 school year, the Home Visit Project, a program of the nonprofit Stand for Children-Dallas, surveyed the 700 teachers and school staffers at the Dallas Independent School District who had participated in the home visit program. According to Stacey Vanhoy, the Dallas director of Stand for Children, 72 percent reported that attendance had increased either somewhat or greatly as a result of the home visits, and 70 percent said that parent-family engagement greatly improved. Most of the visits were with children in pre-K through fifth grade, Ms. Vanhoy said.

In 2018, researchers from Johns Hopkins published a study that examined the effect of the model at four large urban school districts across the United States. It found similarly positive results: Schools that implemented the practice systematically had at least a 5 percent drop in chronic absenteeism, and students were more likely to score at a proficient level on the English Language Arts assessment, said Sol Bee Jung, a co-author of the study.

A simple solution to a complex problem?

While the home visit model appears to be a straightforward way to build engagement, reduce absenteeism and improve certain academic measures, the simplicity of the program means it can sometimes be overlooked by decision-makers, said Ms. Vanhoy, whose organization trains Dallas I.S.D. teachers to perform home visits.

Some school district leaders and policymakers assume “that can’t be the answer because that’s too simple,” Ms. Vanhoy said. “So you go after the more complicated research, or new curriculum, or new this or new that.”

Funding is another hurdle.

Teachers are usually paid for each visit, but the amount they receive and the way those payments are funded varies considerably. “Typically that is one of the first questions that we get: ‘How do we pay for this?’” said Gina Martinez-Keddy, the executive director of Parent Teacher Home Visits.

Most of the home visits across the nation are funded by Title I, a federal antipoverty program for the country’s poorest schools, she said. Without Title I funding, schools sometimes must rely on a patchwork of grants, state funding or other types of federal funding to pay for the visits.

Connecticut’s Office of Early Childhood, for example, used a federal Preschool Development Grant to provide a free, high-quality pre-K education for up to 740 4-year-olds annually over the last four years — funding that also paid for home visits, said Deborah Watson, the P.D.G. project manager. The grant ends in December, however, and along with it, the home visits.

District of Columbia Public Schools partners with the Flamboyan Foundation, a nonprofit dedicated to fighting inequality in education, to train its teachers to do home visits program. During the 2018-19 school year, D.C. schools completed 11,442 visits — the most in the nation, according to Ms. Martinez-Keddy.

Teachers are paid $40 per visit, said Natalie Treadgold, manager of family engagement at D.C. schools. The district, which has about 49,000 students, continues to fund the program each year because it works, she added.

“We see this as a proven strategy to support academic success, and it’s really worth that investment,” Ms. Treadgold said.

Marcina McCallop, 31, the mother of Hosea, a 5-year-old who will attend kindergarten later this year at the Browne Education Campus in Washington, D.C., received a visit from her son’s new teacher, Lakisha Scarlett, in July.

Ms. McCallop was excited to learn that her son would be studying nature in school.

“My son he really likes to play with little critters outside, and bugs and stuff,” she said.

The visit also provided an opportunity for Ms. McCallop to tell Ms. Scarlett about Hosea’s speech problem. “He gets his words mixed up sometimes,” Ms. McCallop said.

Ms. Scarlett said she plans to meet with the parents of every student in her class and provide them with her cellphone number.

“In my 13 years of teaching, I haven’t had anyone to abuse it,” she said. “The parents, by having those open lines of communication, they feel more comfortable with reaching out to me by saying, ‘Oh, I need you to model this lesson for me’ or ‘I need more support in this particular area.’”

Sometimes parents are wary of home visits, especially if they’ve had negative experiences with schools in the past.

“Too often the communication that happens face-to-face, on the phone, in a visit is to talk about something that’s wrong. Your child’s not making progress, or your child has a behavior problem,” Ms. Watson said.

At Denver Public Schools, which has about 90,000 students, they do around 11,000 home visits a year. Kreesta Vesga, a first-grade teacher at Trevista at Horace Mann, said she has only ever had one family decline to participate in the five years that she has been visiting students outside of school. She considers the program invaluable.

“Little kids tend to be afraid of people they don’t know, but then they started not to be afraid,” said Ms. Vesga, who attempts to visit all of her students each year. “By the second home visit, which was probably in March or April, they would come and talk to me about everything.”

At the Kashto home in Baltimore, Yumna, who had hidden her face in her 8-year-old sister’s arm upon her teachers’ arrival, became less reserved as the visit progressed.

Ms. Hardy, her teacher, asked the Kashtos: “What are your hopes and dreams for Yumna?”

Her father, Ayman Kashto, turned to Yumna. What did she dream of becoming, he asked her, in Arabic. A doctor? An engineer? A pharmacist?

“A doctor,” she said firmly, sliding off her mother’s lap and looking at the teachers with interest for the first time.

Now that the family has grown, they are planning to move to a larger home, Mr. Kashto said, which means Yumna may need to prepare for another transition: starting anew at a school in a different district. Until then, the Kashtos are adjusting to life with a newborn and readying Yumna for her first day of pre-K.

After discussing Yumna’s bedtime routine, drop-off and pickup arrangements (Yumna’s 8-year-old sister, Fatima, will be shepherding her between the bus and her classroom), and nightly homework (Yumna’s twin brothers, high school freshmen Hassan and Abdullah, were instructed to check her backpack for assignments), Ms. Hardy and Ms. Scott said their goodbyes.